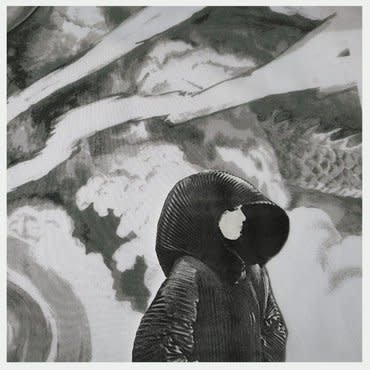 Black Rain returns with Computer Soul: the final part of a sequence of Blackest Ever Black releases that began with 2011's Now I’m Just A Number: Soundtracks 1994-95, and a first glimpse of the project’s richly imagined future. For this outing Stuart Argabright (Ike Yard, Dominatrix, Death Comet Crew) is joined by BR founder member Shinichi Shimokawa as well as more recent recruit Soren Roi and Zanias (vocalist on 2015’s Dark Pool) - making for the most group-oriented iteration of Black Rain since its earliest days. Sonically too, there is a sense of evolution but also of coming full circle: the cyberpunk techno of Argabright’s celebrated William Gibson soundtracks (compiled on Now I’m Just A Number) and extrapolations of Dark Pool’s neuromantic yearning cut with glimpses of the thrash and industrial rock energies that animated Black Rain’s incendiary live shows -and sought-after tapes for Kombinat and TPOS -in the early 90s. More than ever, Black Rain is propelled by a powerful science fiction impulse, whether responding to the themes and characters of Gibson’s Sprawl or the Blade Runner universe (particularly K.W. Jeter’s spin-off/continuation novels which extended its mythology, and timeline, further). It’s not news that many of these works’ most powerful predictions and prophesies have come to pass - the replicants are already living among us - so Computer Soul projects further into several possible unforeseen futures, its events “set” in the second half of the current century, fifty or so years after those of Dark Pool. The hyper populated metropolises of Dark Pool are no more; the apartments are empty, haunted by ghosts of AC current, devices and machines running lonely without their owners...a melancholy internet of things. Where has everyone got to? Gone but perhaps not gone. Oblivion beckons - always does -but on the other side of that, something else... another time, another place, a river....and a new way of living.