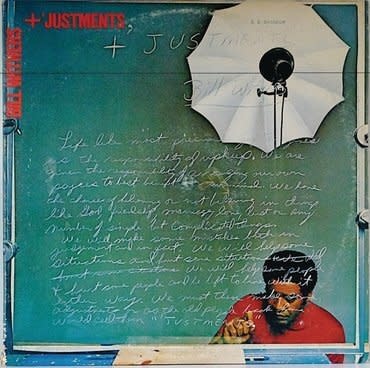 Back in March 2004 music magazine Mojo included Withers' fourth album on a list of "67 Lost Albums You Must Own. Replacing the hired hands of his debut with former employees of Charles Wright & the Watts 103rd Street Rhythm Band proved equally important in shaping Withers' identity. Not only had they been instrumental in creating a landmark with his second album Still Bill, follow-up Live at Carnegie Hall showed how easily they could replicate their unrestrained approach on-stage, performing quite a few tunes which hadn't yet appeared on a studio album. This experience further tightening a natural combination, the band was set for Withers' third studio album. The moody overtones of Justments suggest both band and singer might have suffered a bit from fatigue, a notion not altogether far-fetched since they would dissolve upon completing it. The spine-tingling string sections for You and Ruby Lee for instance invoke the memory of Still Bill's intriguing Who Is He and What Is He to You. The former would be released as a single and crack the Top 15 R&B chart, as would Heartbreak Road" and The Same Love That Made Me Laugh. The demise of Sussex led to both the labels' catalog and Withers himself being transferred to Columbia. Though some of its feel would always shine through his releases for his new employer, Justments stands out for being the last album where the artist's unique character takes the foreground rather than being mostly left to drown in a glossy production. Thus, while its "lost album" status is mostly due to it being out of print for ages, in a just world it would be re-released back to back with 1975's Making Music. This just might turn out historically interesting, as it would document Withers' evolution towards the guilty pleasure of Lovely Day.