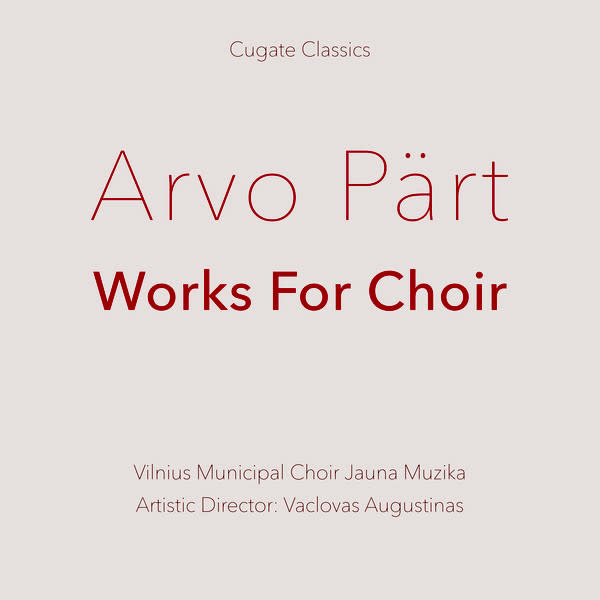 Cugate Classics presents a reissue of the 2001 release Works For Choir by Arvo Pärt, one of the most important and influential composers of our time. Arvo Pärt (born 1935 in Paide, Estonia) doesn't need to be introduced to anyone who has the slightest interest in classical music, and his audience reaches far beyond the regular attendants of symphony halls. After first serial compositions, Credo (1968) was a turning point in Pärt's life and work, being the first piece carrying a religious title and expressing a creative crisis that Pärt answered by lesser compositions and studying medieval and Renaissance music in search for a new musical language. In 1976, Pärt returned with Für Alina and introduced his new (and self-developed) style that should become his trademark sound which made him the famous and honored composer he is now: the so-called tintinnabuli. In 1984, after the Estonian composer and his family emigrated from the USSR and settled in Germany, the album Tabula Rasa opened the next important chapter in PÄRT's career: the ever continuing close relation to Manfred Eicher and his ECM label where many of the composer's works have been released since. Works For Choir presents several compositions for choir from the period from 1989 to 1991, recorded in Vilnius with the award winning Vilnius Municipal Choir Jauna Muzika under the artistic direction of Vaclovas Augustinas. The Vilnius Municipal Choir Jauna Muzika choir was founded in 1989 by the conductor and composer Remigijus Merkelys and long-time director Algimantas Gurevičius and has since won several prizes, among others six Grand Prix in 16 international choral competitions around the world, and in 1993 it was awarded with the highest prize, the Grand Prix Europeo, in a competition organized by the International Federation of Choral Music.