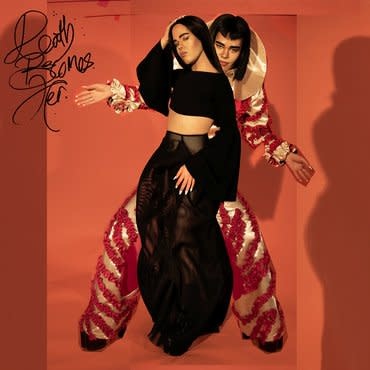 Angel-Ho is known as one of the founders of Non Worldwide, alongside Chino Amobi and Nkisi. Highly regarded as a DJ and electronic music producer, on Death Becomes Her she shifts things up to another level. Pulling on inspiration from her flamboyant favourites from Lady Gaga, Missy Elliot, and Bjork through to Kanye West, this ambitious, artful and sometimes radical album of neo-pop pushes the pop framework even further, often teetering on the brink of vertiginous chaos and dissonance, whilst slowly revealing its depth and grandeur once you settle into its sound world.

Alongside a cast of collaborators that include French producer Nunu, South African producer Baby Caramel, Asmara Maroof from Nguzunguzu, Bon and Gaika, Angel re-orientates the usual trans-atlantic pop sound to encompass a brace of experimental, diasporic producers to create beats that alternate between angular, propulsive, murky, loose, abrasive and breezy.