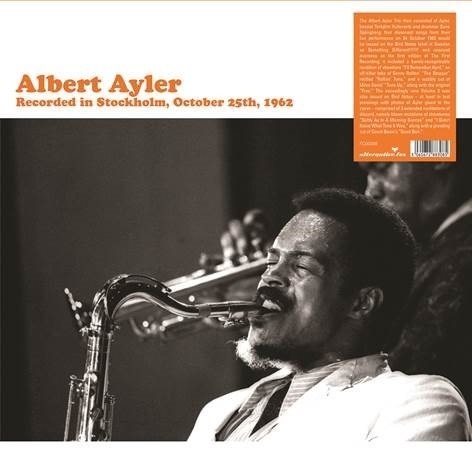 The Albert Ayler Trio then consisted of Ayler, bassist Torbjörn Hultcrantz and drummer Sune Spångberg; four dissonant songs from their live performance on 24 October 1962 would be issued on the Bird Notes label in Sweden as Something Different!!!!!! and reissued overseas as the first edition of The First Recording; it included a barely-recognisable rendition of showtune “I’ll Remember April,” an off-kilter take of Sonny Rollins’ “TheStopper” retitled “Rollins’ Tune,” and a wobbly cut of Miles Davis’ “Tune Up,” along with the original “Free.” The exceedingly rare Volume 2 was also issued on Bird Notes – at least in test pressings with photos of Ayler glued to the cover – comprised of 3 extended meditations of discord, namely blown mutations of showtunes “Softly As In A Morning Sunrise” and “I Didn’t Know What Time It Was,” along with a growling cut of Count Basie’s “Good Bait.”