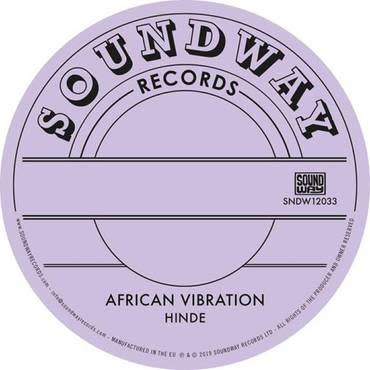 Continuing the series of 12” dancefloor singles, Soundway Records presents the highly sought after track Hinde by African Vibration, now remastered from the original master tapes. Originally pressed on 7” vinyl in 1987, it was the group’s last release together. A unique piece of East African synthesised electronic soul from 1980s Kenya, it was reissued by Soundway as part of the Kenya Special: Volume Two compilation in 2016, but following the recent acquisition of the master tapes it has now been revitalised to a standard surpassing its former glory, and cut loud on 12” vinyl for the dancefloor. The B Side features a deep, extended rework with cruising synth stabs and slick production from one of Soundway’s recent recruits, Julien Dyne, who released his critically acclaimed album Teal in 2018. For fans of: Kenya Special compilations, Julien Dyne, Lord Echo, Mangase / Hafi Deo 12”, Electric Wire Hustle and Steve Spacek